The possible urban futures of Bromley by Bow

ISSS was invited to take part in the British Council’s International Architecture Showcase for the London Festival of Architecture 2014. Staying in a two weeks residency at the iconic Balfron Tower located in Poplar and designed by Hungarian-born architect Ernö Goldfinger, ISSS was  working together with The Decorators from 9th till the 21st of June in London on the issue of Town Centres. After a series of Urban Explorations in Poplar, in East London, a participatory game was created to explore the “Possible Urban Futures of Bromley by Bow”. After a presentation of the project and it’s reflective background the game was played as a public premiere during a workshop within the London Architecture Festival at the Balfron Tower on 21st of June 2014.

EVERYTHING IS ALREADY THERE HOW CAN IT BE FOUND, LINKED AND USED?
Day 3 – 12th June 2014 | Reflections
After two days of intense exploring of Bromley by Bow we used the collected pictures, videos, audios, sketches as well as the gifts we were given and the conversations we had during our Dérives to discover potential links between them. We are dealing with the question, how the relationship space and time can be represented. Our thoughts take us on an intellectual Dérive exploring the relations between urbanism, architecture, the public sphere of high-streets and the multiple functions including cultural, commercial, social as well as non-commercial activities which are linked to them. We are assembling multiple perspectives on these issues creating a multi-layered understanding of urbanity.

URBAN SPACE IS A PALIMPSEST OF ITS POSSIBLE FUTURES
Day 4 – 13th June 2014 | Resources, Sites, Potential Tactics
Ways of classifying information and possibilities of how to interpret them in their interdependency with space and time are explored back in the studio. The undertaken analysis of Bromley by Bow helps us to identify local resources by reading between the lines of multi-layered palimpsest of urban space. The multiple perspectives on the existing situation and the imaginary possible futures that unfold as a result of this approach open up an immense pool of potential tactics to use and re-use these local resources in order to engage actively with the urban space of Bromley by Bow.

URBANITY IS MULTI-LAYERED & URBAN LIFE IS UNPREDICTABLE
ENABLING POTENTIAL CHANGE INSTEAD OF SOLVING OR ELIMINATING PROBLEMS
ALLOWING THE UNKNOWN TO BE PART OF THE PRODUCTION OF URBAN SPACE
Day 5 – 16th June 2014 | Questioning the masterplan approach | Situational urbanism
Modernist urban planning is based on the idea that urban life is linear and urbanity projectable but the past decades have shown that this idea was a blind alley. Urbanity is multi-layered and urban life unpredictable. The consequence of this perception is the abandonment of the masterplan and the orientation towards process-oriented approaches to urbanism. This is not a new insight but in it’s full consequences still radical. Based on our site analysis, local narratives and potential tactics, we started to develop an actor based and rhizomatic approach to explore a multitude of possible urban futures for Bromley by Bow. We believe that the linear masterplan-dominated urban environment of Bromley by Bow can be fractured by the joyful flows of the practices of everyday life. Our contribution prepares the ground and lays the tools to initiate a multitude of such fractures thus enabling the ever-changing game that is the production of urban space.

TOWN CENTRE = HIGH STREET = MORE THAN SHOPPING = MORE THAN HOUSING = MORE THAN INDUSTRY = MULTI-LAYERED URBAN LIFE = URBANITY = URBAN INTENSITY
Day 6 – 17th June 2014 | Future Pre-Conditions | Possible Urban Futures
The physical shape of urban space can be planned but actual urban life is something organic and inscribed in a permanent process of transformation undertaken by its actors. The coexistence of cultural, social, handicraft, industrial, commercial as well as many other activities are forming the multiple layers of urban life that interact with each other in the public sphere to generate a vibrant urbanity. The socio-economic, ecological and cultural societal circumstances are shaping the ever-changing conditions for the perpetual production of the next urban futures. Therefore the diversification of these activities is an influential set screw for such pre-conditions and thus a key instrument for the continuously re-writing of multi-branched narratives of possible urban futures for Bromley by Bow. 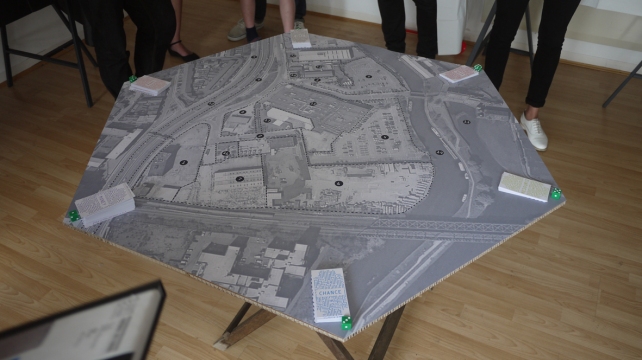 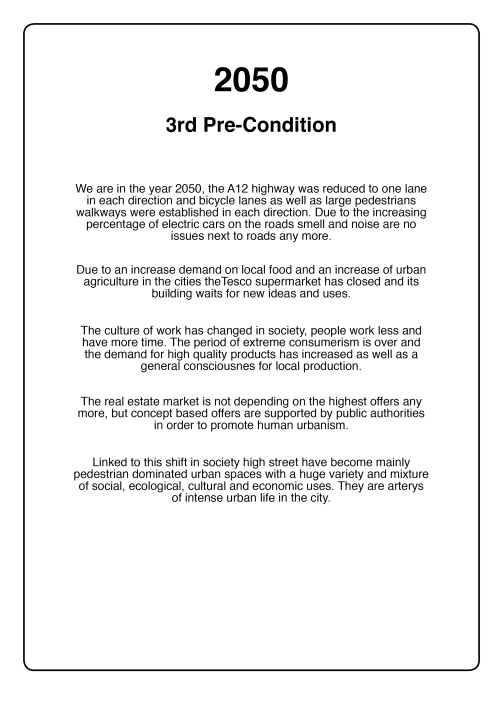 IAS from Ingrid Sab on Vimeo.

About the British Council
The British Council is the UK’s cultural relations organisation, extending trust and engagement between the UK and countries around the world by the exchange of knowledge and ideas.
The Architecture, Design, Fashion team in Arts Group develops exhibitions, seminars, workshops, collaborative projects and exchanges in conjunction with our colleagues and partners in over 100 countries.

About the London Festival of Architecture
The London Festival of Architecture , now in its 10th year, celebrates London as a global hub of architectural experimentation, practice and debate. Taking place throughout June, the annual festival provokes questions about the contemporary and future life of the city, and promotes positive change to its public realm. The city-wide programme is delivered by leading cultural and academic institutions alongside associated projects by practices and individuals. –> find the LFA on Facebook

ISSS is a collaborative research, architecture and urbanism practice based in Berlin